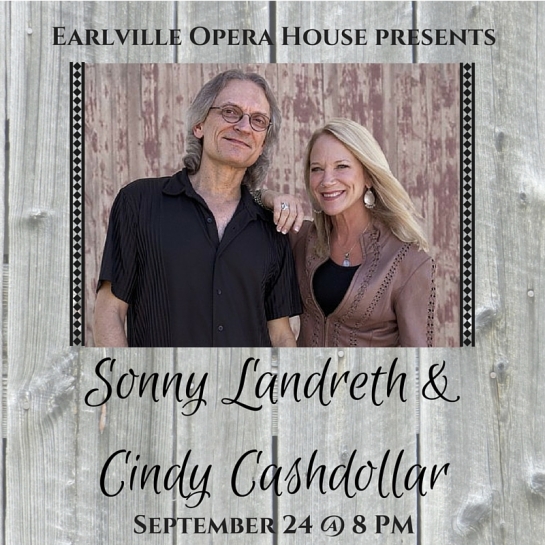 The Earlville Opera House is pleased to host an evening with blues legends Sonny Landreth and Cindy Cashdollar, Saturday September 24 at 8 PM.

Both sporting illustrious solo careers, the combination of southwest Louisiana-based guitarist and singer-songwriter Sonny Landreth and dobro and steel guitar player Cindy Cashdollar creates an electric duo of blazing guitars and classic roots vocals. Having played with the likes of Willie Nelson, Eric Clapton, and Merle Haggard, among others, Landreth and Cashdollar are often described as “musician’s musicians,” both at the top of their game.

Sonny Landreth’s unorthodox guitar style comes from the manner in which he simultaneously plays slide and makes fingering movements on the fretboard. Landreth, who has an easygoing personality, can play it all, like any good session musician. His distinctive guitar playing can be heard on recordings by John Hiatt, Leslie West and Mountain, and other rock & rollers. Landreth began playing guitar after a long tenure with the trumpet. His earliest inspiration came from Scotty Moore, the guitarist from Elvis Presley’s band, but as time went on, he learned from the recordings of musicians and groups like Chet Atkins and the Ventures.

Cindy Cashdollar’s unerring ability to perfectly complement a song or step out with a tasteful, imaginative, and exciting solo – and to do it in so many musical genres – has made her one of the most in-demand musicians in the American roots music scene. She has worked with numerous artists ranging from Dave Alvin and BeauSoleil to Marcia Ball and Peter Rowan. Cindy first heard the unique sliding sound of the Dobro in her hometown of Woodstock, New York where she honed her skills playing with bluegrass legend John Herald, blues great Paul Butterfield, Levon Helm, and Rick Danko of The Band.

Sonny and Cindy perform Saturday September 24. Doors open at 7:30, show begins at 8 PM. Tickets are $30 general admission, $28 members, and $15 for students and children (under 18), with premiums applying in the first 4 rows of seating. The Earlville Opera House is wheelchair-accessible with a ramp and a lift.  For more information or to purchase tickets, call 315-691-3550 or visit www.earlvilleoperahouse.com. Earlville Opera House events are made possible in part thanks to the New York State Council on the Arts with the support of Governor Andrew M. Cuomo and the New York State Legislature.