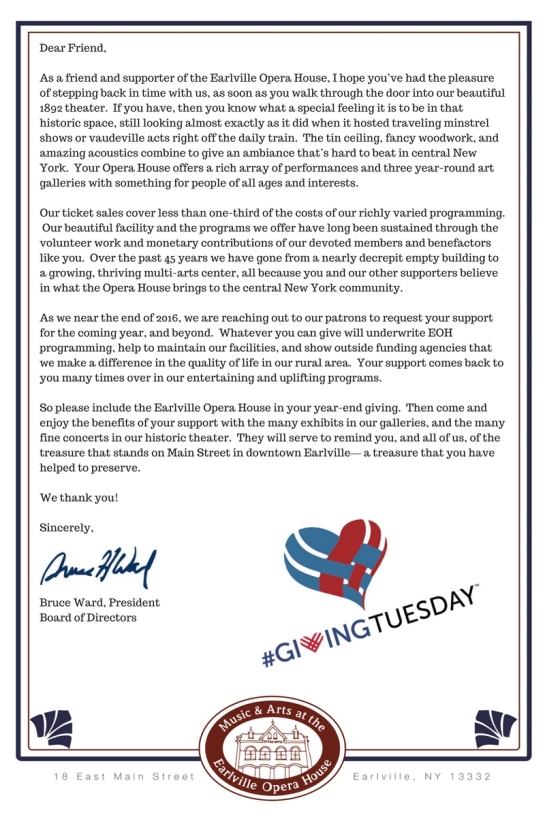 The Earlville Opera House is thrilled to present an evening with rock legend Jorma Kaukonen, Saturday December 3 at 8 PM at the Catherine Cummings Theatre in Cazenovia, NY. In a career that has already spanned a half-century, Jorma Kaukonen has been one of the most highly respected interpreters of American roots music, blues, and Americana, and at the forefront of popular rock-and-roll. A member of the Rock & Roll Hall of Fame and a Grammy nominee, he is a founding member of two legendary bands, Jefferson Airplane and the still-touring Hot Tuna.

Jorma Kaukonen’s repertoire goes far beyond his involvement creating psychedelic rock; he is a music legend and one of the finest singer-songwriters in music. Jorma currently, as he has for many years, tours the world bringing his unique styling to old blues tunes while presenting new songs of weight and dimension. Jorma most recently released a solo album, Ain’t in No Hurry, early in 2015 on Red House Records.

After a break from college and travel overseas, Jorma moved to California, where he returned to classes at Santa Clara University and earned money by teaching guitar. It was at this time, that he met Paul Kantner and was asked to join a new band: Jefferson Airplane. Jorma invited his old musical partner Jack Casady to come out to San Francisco and play electric bass for Jefferson Airplane, and together they created much of Jefferson Airplane’s signature sound. A pioneer of counterculture-era psychedelic rock, the group was the first band from the San Francisco scene to achieve international mainstream success. They performed at the three most famous American rock festivals of the 1960s— Monterey (1967), Woodstock (1969) and Altamont (1969)—as well as headlining the first Isle of Wight Festival (1968). Their 1967 record Surrealistic Pillow is regarded as one of the key recordings of the “Summer of Love”. Two hits from that album, “Somebody to Love” and “White Rabbit”, are listed in Rolling Stone’s “500 Greatest Songs of All Time”.

Jorma Kaukonen performs Saturday December 3 at the Catherine Cummings Theatre in Cazenovia, NY. Doors open at 7:30, show begins at 8 PM. Tickets are $45 general admission or $23 for students and children (under 18). For more information or to purchase tickets, call 315-691-3550 or visit www.earlvilleoperahouse.com. Earlville Opera House events are made possible in part thanks to the New York State Council on the Arts with the support of Governor Andrew M. Cuomo and the New York State Legislature.

Comprised of CNY-native Adrian Enscoe, Sydney Shepherd, and Regina Strayhorn, the Bandits are based in Brooklyn, NY, and first gained attention for conducting “musical sticks-ups” in the subways of New York City with their three part-harmony and nostalgic sensibilities. All three bring their unique voices and songwriting abilities to the table, creating a variety of sounds and styles that create a musical web of sound hard to pin down, and even harder to resist.

Bandits on the Run perform Saturday November 26. Doors open at 7:30, show begins at 8 PM. Tickets are $25 general admission, $20 members, and $13 for students and children (under 18). The Earlville Opera House is wheelchair-accessible with a ramp and a lift.  For more information or to purchase tickets, call 315-691-3550 or visit www.earlvilleoperahouse.com. Earlville Opera House events are made possible in part thanks to the New York State Council on the Arts with the support of Governor Andrew M. Cuomo and the New York State Legislature.