She is, of course, the daughter of 1950s country superstar Carl Smith, and June Carter Cash, who was herself the daughter of Maybelle Carter—“Mother” Maybelle Carter of the original Carter Family trio that formed in 1927 in the tiny Southwest Virginia hamlet of Maces Springs. Along with Mother Maybelle’s brother-in-law, A. P. Carter, and his wife and her cousin Sara, the Carter Family recorded such seminal country music songs as “Can The
Circle Be Unbroken (By And By),” “Wildwood Flower” and “Keep On The Sunny Side,” and forever influenced the development of bluegrass, folk, pop, gospel and rock music
genres, as well as country music.

“She represents the third generation of the pioneering Carter Family, whose recordings since the late 1920s are considered the blueprint for country music of the subsequent century.” (Chicago Sun-Times)

Carter brings her own mark to the genre. “Carter lights a fire under nearly every tune…even the low-key love songs generate some sparks.” “A great legacy can be a blessing and a curse, and when your mother is June Carter and your stepdad is Johnny Cash, you’re going to have a lot to live up to in the minds of most folks. Carlene Carter has built a pretty remarkable career for herself…But it’s rare when a critic or biographer doesn’t mention Carter’s place in one of country music’s founding families, and on 2014’s Carter Girl, she embraces their vital role in country music’s history while also putting her own stamp on their body of work…strengthening her music rather than buckling under its weight, and this ranks with her finest recorded work to date.” (Mark Deming)

“Carlene Carter’s place in the history of American music was assured long before the conception or recording of her new CD, Carter Girl, but its creation makes for a solid insight into her world…The new album serves as a tribute to her musical forebears, but also as a statement of self. Her sound, even when paying tribute to Carters previous, is very much her own. The songs themselves are gleaned from both her own songbook and that of her family…An updated “Lonesome Valley” (here titled “Lonesome Valley 2003”) acts as a tribute to both Carlene’s mother, and Johnny Cash, and Carlene’s half-sister Rosie Nix Adams, all of whom passed in that year. (PopMatters.com)

Her first album for Rounder, it features songs spanning the Carter Family generations, including celebrated Carter Family songs like “Gold Watch And Chain,” and others written and performed by the descendants of the original Carter trio—including Carlene herself.

Carlene Carter shares the richness of that family experience and its stamp on Americana music.  She shares her insights into the new project: For example, Tall Lover Man, “It’s one of Mama’s ‘murder mayhem’ songs, from [her Grammy-winning 1999 album] Press On,” Carlene says. “It’s pretty dark in content, and very Carter Family-esque: So many of their songs involve cheating and killing the guy—or praying to Him, since maybe 75 percent of their songs were religious or faith-bound.” For the new release on ROUNDER RECORDS’ CARTER GIRL, Carlene Carter put her self-ascribed “Carlene rhythm” on it—her version of her grandmother’s famed “Carter scratch” acoustic guitar-picking technique—to give it more drive.

“Carter is not afraid of updating older songs, in fact, it is her pride and joy. Joy is given to songs like “Tall Lover Man”, lifting her mother’s story from the pages of history and giving it a rousing, upbeat tone. The beautifully balanced take on “Gold Watch and Chain” is delivered with knowledge, awareness and passion…. (AllMusic.com)

Share a Carter Girl’s joyful sound in the incredible acoustics of the 1892 historic opera house.   Tickets are available online or by calling EOH at $30, $28 EOH members, $25 students. Premium seating applies in the first 4 rows. The EOH Theater is wheelchair-accessible with a ramp and a lift. For more information, or to reserve your seats, call 315-691-3550 or order online at www.earlvilleoperahouse.com. The Opera House is located at 18 East Main Street, in Earlville, NY 13332.

You Tubes of Carlene Carter to check out

Carlene Carter had her biggest hits in the ‘90s, with “Every Little Thing” and “I Fell In Love” both reaching No. 3. The latter was the title track of an album that also included “Me And The Wildwood Rose,” a song that she wrote about being a Carter girl, which she most fittingly revives on Carter Girl.

Boston Globe:
Carlene Carter says she’s been waiting her whole life to make “Carter Girl,” which finds the third-generation representative of country’s most famous family honoring her lineage through a collection drawn from the Carter Family and from mother June and aunts Helen and Anita (collectively the Carter Sisters), along with a few topical contributions of her own. Carter’s pose on the cover evokes her mother, but this isn’t meant to be a sepia-toned reproduction of those old songs. Instead, Carter brings them into her musical world — charging June Carter’s murder-suicide ballad “Tall Lover Man” with the sort of twangy, poppy, country-rock treatment that has always been the daughter’s calling card, giving an update to A.P. Carter’s “Lonesome Valley” via the soulful mourn of “Lonesome Valley 2003,” and reprising her own “Me and the Wildwood Rose” to sing her memories of time spent on the road with the Carter Sisters. This may be the best record this Carter girl has ever made. (Out Tuesday)

Boston-based bluegrass quintet Della Mae has just released their debut CD for Rounder Records this May.  The band is on the rise, returning recently from being selected by the U.S. State Department to tour representing American bluegrass music around the world.

Glen Herbert writing for the Hudson Valley Bluegrass Society shared his impressions from their May release of This World Oft Can Be:  “Well, if you want to get on my good side, cover a song from Laura Boosinger, and indeed that’s how Della Mae starts this collection…and the version included here is a very faithful romp through a delightful piece. From there, Della Mae keeps the energy up on what is easily the best release from them to date. 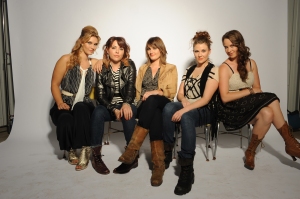 In a relatively short period of time, Della Mae has become a sensation in the music world. Commanding a powerful collective chemistry with vocal, instrumental, and songwriting talent to spare, the Boston-based combo mines time-honored elements to create music that’s unmistakably fresh and contemporary.

“The members of Della Mae clearly know the tradition…and choose to shine a light on it. The last song on the album, “Some Roads Lead On” (one of the few songs that wasn’t written by members of the band) is gorgeously played on June Carter Cash’s 1933 Gibson L5. They recorded the album in Johnny Cash’s studio, and they borrowed John Hartford’s fiddle for “Letter from Down the Road.” …With so many young bands trying to race out as fast as possible from the traditions, this is a band that is trying to take some of them with them.”

Don’t miss the world-class bluegrass of Della Mae on Friday, July 12th. General admission is $18 and $16 for EOH members and students are discounted to $13.  Premium seating in the first 4 rows is an added $5. The EOH Theater is wheelchair-accessible with a ramp and a lift.

During your visit, take advantage of the exhibits in the three EOH Art Galleries, the Artisan’s Gift Shop featuring New York artists and the EOH Arts Café!  Delicious refreshments will be available before the show and during intermission, including hot and cold drinks.  For more information, or to reserve your seats, call 315-691-3550 or order online at www.earlvilleoperahouse.com.  The Opera House is located at 18 East Main Street, in Earlville, NY.